This is the first installment in a new series featuring fellow studio craft artists who, through their studio practice, are engaging life in the early 21st century in a variety of inspiring ways.  This series is also borne of a desire to illuminate craft as a sublime and appropriate undertaking  in a time of social, political and economic complexity.  At its core though, this series is about the life and work of grounded artists sharing a passion for craft in all its nuanced glory.

I’d like to open this series with a little sketch of my long-time friend, Ana Vizurraga.  Ana is among the first of my friends to inspire me to pursue my own lines of craft work and inquiry.  She is a quiet but passionate ceramic artist, a committed educator, and “creative expeditionary” (to paraphrase Bob Dylan).   You probably won’t find much about her on the web – AV doesn’t have a “web presence,” per se.  That does not prevent her from being highly regarded by her creative colleagues and collectors, and much-loved by her students, who range in age from c. 5 to 65+.  She approaches her work with open heart and mind and I have always admired her deep spiritual connection to the medium, married with a practical and direct engagement with its essential qualities.  Symbols of earth, nature, and fecundity are fundamental to Ana’s work.  References to nature’s diversity abound, each piece representing a soulful reverence for all of life, often peppered with joy-affirming humor or ironic detail.   She dedicates most of her efforts to “non-functional” work, although her functional work, to the extent she makes any, often possesses similar qualities (I should note that in this instance I am defining functional as e.g., something you can serve food or beverages on/in, etc.).  In short, AV is a high-level artisan working in a very traditional craft medium.  I consider her first a fine-craft artist.  She finds her place along the continuum occupied by myriad artists of radically diverse perspectives who also work in broad range of traditional craft media.

I feel Ana’s work finds its source in a sort of elemental nature-mysticism.  Indeed this is what attracts me most to it.  We drink from the same well.  With clay, though, there is a direct, primordial suchness which is unmatched by other craft media (although perhaps traditional wet-felting runs a close second).  It is earth, and a little water.  One shapes this material with one’s hands.  It can be shaped into a dwelling, vessel or ritual implement, with few additional inputs.  It is transformed by air, heat, fire.  How much more elemental can it get than that?  Even though my primary media don’t “dance with fire” (in the literal sense anyway), I am particularly interested in fire as a transformative element in craft.  As long as I have known Ana I have usually only ever seen the hand-building process or her finished work.  The firing process is largely concealed in most kiln technologies.  Not so with raku.  Late last year, the stars aligned and I was invited to observe and “assist” in a raku firing.  I am grateful to have had the opportunity to see this process first-hand, and honored to have this creative flame burning so brightly in my life! 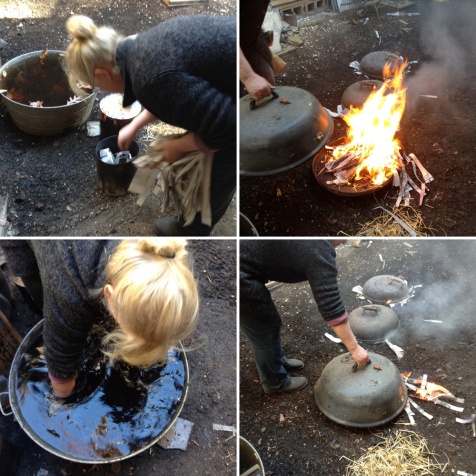 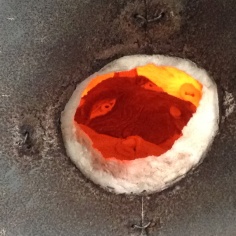 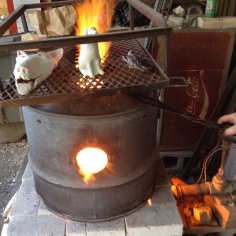 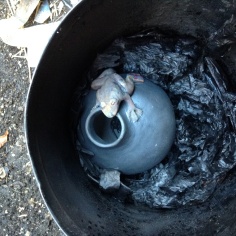 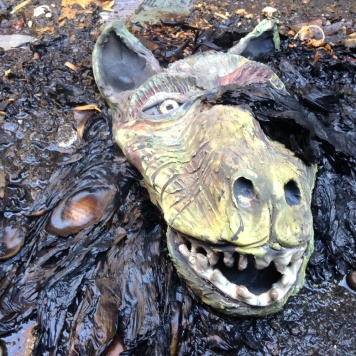 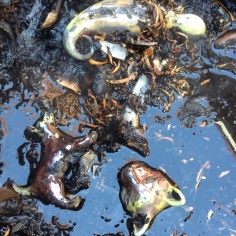 Receptive #4 heads to the #Hambidge auction next week.
Final day of the natural dye print workshop (this past Sunday) - a resounding success! Thank you to all who participated! I’m also grateful for the space and facilities at the SEFAA Center. 🎉More images in stories.
Scenes from Day 1 of the Printing w/Natural Dyes workshop at the SEFAA Center.
Contemplating. Studio vignette.
Meanwhile…3-d work in progress.
Some examples of print/paint process with #naturaldyes. I’m teaching a 2-day IRL workshop in mid-September - more info from me soon or visit @sefiberarts / fiberartsalliance.org for their workshop listings. Space is limited.
Strange year for me, much of it spent outside of the studio - but that’s about to change….I began cutting and assembling these pieces earlier this year, a continuation of the stitched module series I started during “lock-down” last year. Now I’m preparing these for framing.
@swancoachhousegallery Summer Invitational continues through August 12th.